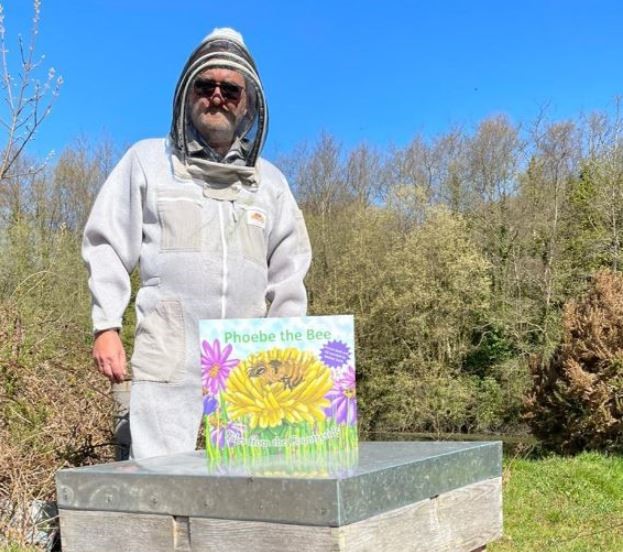 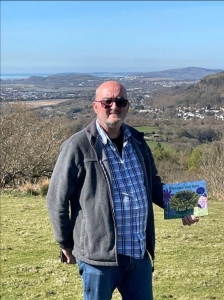 It’s Friday; late frosts nip the buds of emerging shoots and coat the lawns with a carpet of sugar frosting. The sun in April skies, spreads dappled shade under budding trees, with greens and yellows especially bright in the spring sunshine.

I’ve joined Mark Douglas of Bee 1 on his land, just outside Neath in South Wales. Apart from putting names to faces, I’m here to assist him in relocating three colonies of bees to their new home in the valley’s. I don my mask and join him in his car. In the back are three Nucleus boxes (‘Nukes’) containing around 60,000 bees complete with their Queens.

Although we can’t hear them, I’m assured by Mark that they are probably a tad fed up, after being rattled around in the back of the car for over an hour, and now as we complete their journey with a mile and a half of bumpy gravel track to their final destination, I would imagine they’re planning their revenge!

Several cattlegrids later and we climb steeply to a clearing in the gorse bushes. In front of me is our ‘Phoebe the Bee’ hive, busy with workers coming and going. Tales from Mother Earth are currently collaborating with Bee1 in getting the conservation message out to children about Bees and other pollinators and has very kindly donated a home for Phoebe.

Mark initially hopes to get a copy of our book to all primary schools in Wales.

Next to that, there’s a fenced off area containing the main apiary, with an array of different hives and the all-important field HQ of Bee 1. I’m charged with carrying one of the Nukes and placing it on a vacant hive, which will become their new home. I suddenly feel the huge weight of responsibility in their success.

We leave the nukes to settle for half an hour or so to calm the bees down, while Mark shows me around the apiary, describing the different hives, looking inside one of the empty hives and talking about his work and the relationships with his sponsors and supporters. Despite the buzzing all around me and the obvious activity around the entrances to the hives, I felt surprisingly calm in the bee’s presence. With the gorse in full bloom, we could see the bulging pollen sacks on the bee’s legs as they returned to the hive after their mornings foraging. Interesting, I noticed the activity being more prominent around the hives that were currently in the sun.

“Right,” said Mark. “Time to get you suited up.” And so, it was a first for me, at 59 years old and with no hesitation, I found myself looking through the netting of the head covering in my bee cover-all suit, with my host also duly attired. 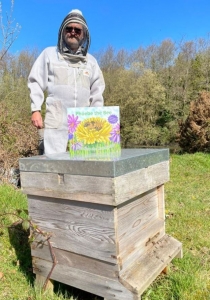 Photo opportunities taken, I discovered that bees don’t much care to have their pictures taken, so no luck there. I then rotated the disc on the front of the nuke to open the entrance allowing the bees to escape, stepping back briskly in case some of them were still looking for vengeance.

In this situation, Mark tells me that bees will fly straight upwards to get a bearing on the hive’s location, taking note of landmarks and trees to guide them home after foraging. He then tells me that the nuke will be left in place for a while before moving the queen and brooding stock to the new hive directly under the styrene box which has been their temporary home.

Having commissioned the three colonies, Mark and I return to the car smiling.

Bee1 was set up to promote the awareness and importance of bees in our ecosystem, and also to use bee keeping as a way of helping in the treatment and recovery to mental wellbeing in humans. The other biproducts from bee keeping is the wonderful honey they produce. Bee1 is also developing and marketing products, from Hive building kits and instruction courses for bee keeping, to honey and flavoured drinks and alcohol. All these products come with a strong message that bees are the most important species on the planet and to also highlight the dangers of the decline in the global populations of all pollinators.

My thanks to Mark for an enjoyable and educational visit. It was truly wonderful to share this experience and to get close to the bees, and to see Phoebe’s home in the beautiful and idyllic countryside of South Wales.

This site uses cookies. By continuing to browse the site, you are agreeing to our use of cookies.

We may request cookies to be set on your device. We use cookies to let us know when you visit our websites, how you interact with us, to enrich your user experience, and to customize your relationship with our website.

Click on the different category headings to find out more. You can also change some of your preferences. Note that blocking some types of cookies may impact your experience on our websites and the services we are able to offer.

These cookies are strictly necessary to provide you with services available through our website and to use some of its features.

Because these cookies are strictly necessary to deliver the website, refusing them will have impact how our site functions. You always can block or delete cookies by changing your browser settings and force blocking all cookies on this website. But this will always prompt you to accept/refuse cookies when revisiting our site.

We fully respect if you want to refuse cookies but to avoid asking you again and again kindly allow us to store a cookie for that. You are free to opt out any time or opt in for other cookies to get a better experience. If you refuse cookies we will remove all set cookies in our domain.

We provide you with a list of stored cookies on your computer in our domain so you can check what we stored. Due to security reasons we are not able to show or modify cookies from other domains. You can check these in your browser security settings.

We also use different external services like Google Webfonts, Google Maps, and external Video providers. Since these providers may collect personal data like your IP address we allow you to block them here. Please be aware that this might heavily reduce the functionality and appearance of our site. Changes will take effect once you reload the page.